Sex with the Dead

Sex with the Dead

In Ancient Japan
Long ago, on the first night of Obon, a widowed samurai named Ogiwara Shinnojo sat on his porch, watching the day fade into night. To his surprise, a beautiful young woman and her maid, who was carrying a lantern emblazoned with a peony, walked near. The pair paused to speak with Ogiwara, and he found the young woman's name to be Otsuyu. An instant attachment was formed, and Otsuyu promised to return the following night, at the same time.

From that night onward, always at dusk, she would arrive with her maid, carrying the same Peony Lantern. Ogiwara and Otsuyu rapidly progressed in their affair, and she took to sleeping with him, always leaving before dawn. This relationship continued for some time, and both were happy.

However, a suspicious neighbor, wondering at Ogiwara's new habit of staying awake all night and sleeping the day away, hid outside his house, peeking through a small hole in the wooden wall in order to observe the old man's nighttime shenanigans. Much to his surprise, he uncovered the widowed samurai passionately entwined with a skeleton, packing only scarce, clinging bits of rotting flesh and cobweb-infested long black hair. Half-mad, the neighbor fled screaming from the scene.

The next day he confronted Ogiwara, bringing with him a Buddhist priest who warned of the danger facing his soul. One cannot dally with the dead. Ogiwara took this to heart, and vowed to free himself from the spell of Otsuyu. With the priest's help, he surrounded his house with ofuda, strips of paper upon which are written Buddhist sutras, offering protection from the supernatural. That night, Otsuyu and her maid came as always, but they cried at the steps of his porch, unable to enter the house.

Night after night she returned, begging Ogiwara to remove the ofuda so that they may be lovers again. Slowly, the lonely old man's resistance slipped away, and one night he left his house to join his beloved.

The next morning, he was nowhere to be found. His friends looked far and wide, until the neighbor suggested they search the cemetery. At long last, they found the graves of Otsuyu and her maid, emblazoned with the same peony pattern. Opening the crypts, no one was surprised to see the corpse of Ogiwara, still passionately entwined with his skeletal lover. 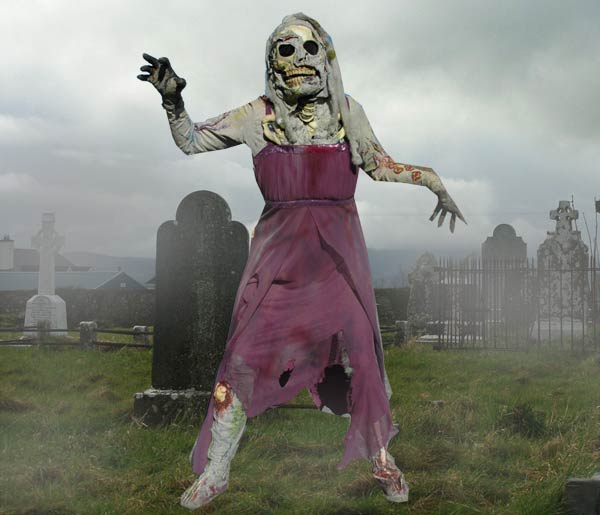 It actually has a movie adaptation.

I like Grave.
there is no happy here
Top